Tim is in the middle of some major computer rehabbing for me….so instead of sharing a million photos of our weekend I am speaking from the heart today.  Well, more from my fingers since none of it is that serious and you know your heart can’t talk and all.  Details.

–  I am really ready for warmer weather, but I am kind of depressed that St. Louis hasn’t gotten a big snow yet.  I have heard that will be remedied on Thursday, here’s hoping for snowmageddon.  Hold the ice.

–  Lately, I have been all about picking up and moving.  Mainly from reading things like this and this.  Sometimes I think there is no better time in our lives to take a risk like living in Fiji for a year, other times I wonder if Asti could even cut it in the desert of South Africa.  I read an article a while back that asked a bunch of people what their occupation would be if money wasn’t an issue, most people said they would work at a bookstore.  I think I would work at a shoppe in a touristy towne (notice the “e’s” added for quaintness) so that I could talk with people from all over the world.  Holler Antarcticians.

–  I have been following Modern Seinfeld on twitter….if you’re not then you should get on that.  And while you’re there….

–  If I had told my eighteen year old self that I would one day love spinach and red onions, I think she would have thrown a bag of Doritos in my face and told me to get a life.  Still not a green pepper fan though.

–  Tim never ate those nuts…I am throwing them away tonight.

–  I have a horrible memory.  I watch Friends every night at bedtime and still give T the “I am so lost” look when he quotes it.  The other day someone was talking about the mini corn scene from the movie Big – which I have seen a million times – and I still can’t figure out what they were talking about.  Tim on the other hand remembers everything.  Even commercials he saw when he was thirteen.  Why won’t he share that memory.

True Story:  When T and I first started dating we were doing the whole Skype-date-thang and he asked what I was watching.  I gave him a QUICK glance of the true-life crime show that had held my attention long enough for my date to notice and you know what he said?  “Oh that’s the one where he sticks the girl in the suitcase, I saw that a few years ago”.  And you know what….he was right.  That man DID put that girl in the suitcase.  I am still amazed.

–  Our baby shark, Fajita took his first bites yesterday.  I can’t believe how patient Tim has been in getting that little booger to eat.  Now we have a Fajita full of shrimp….please tell me I am not the only one laughing.

–  Is anyone else abnormally excited for the Gold Rush finale.  Please let Parker be the one who is now filthy rich.  I am pulling for ya little buddy.

–  I still have yet to drink a soda in 2013 – with the exception of a splash of Sprite in some adult beverages.  Somehow my body hasn’t gotten the memo, because the pounds are doing everything but falling off.

–  Tim did indeed fix my computer.  So expect lots of pictures tomorrow. 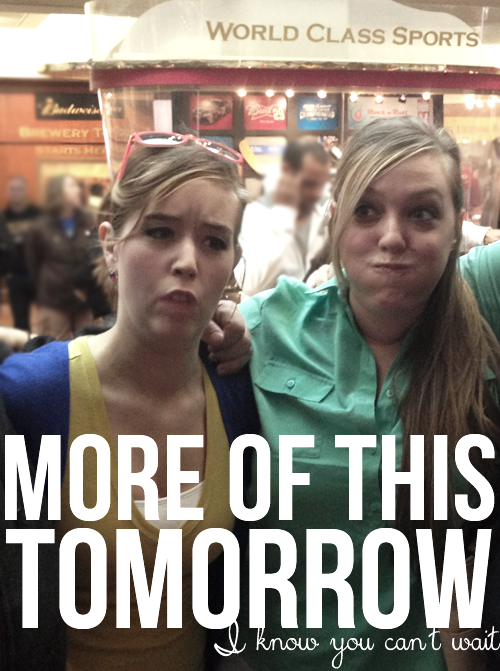 What has been on your mind lately?