We like to think of saltwater tanks as our healthy addiction.

Some of you have wondered how the heck we got into this hobby, well here is your answer.

We have both had fishies in our lives since we were knee-high to a grasshopper.  In fact, I once had a Goldfish…yes a Goldfish….that lived for four years.  Which is a peculiarly long lifespan for a Goldfish, just call me the fish-whisperer.  We both had our share of Betas, and we both had freshwater fish tanks that we were mesmerized by as kiddos.

When I met T, he had a 125 gallon freshwater tank.

Once we started dating, Tim started mentioning that he wanted to get into saltwater aquariums.  Me, wanting to be the supportive gal that he would want to marry eventually, told him that was a great idea.  In fact, it became a huge conversation piece.

I talked him into DIY’ing a stand… 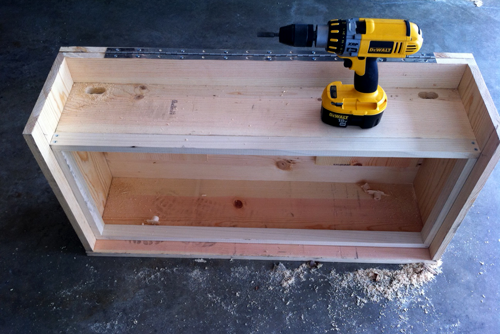 …and he called me yelling about the live rock that “was dying” as we spoke because it got delivered while he wasn’t home.

It didn’t die…drama queen…so then he sent me pictures of all the critters he found in the rock. 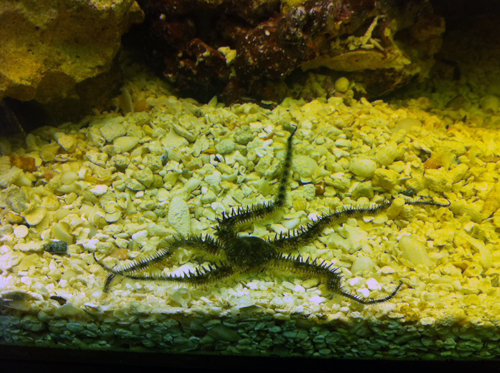 The first tank was basically our bonding.  On our first real date, he showed me his beautiful empty tank. 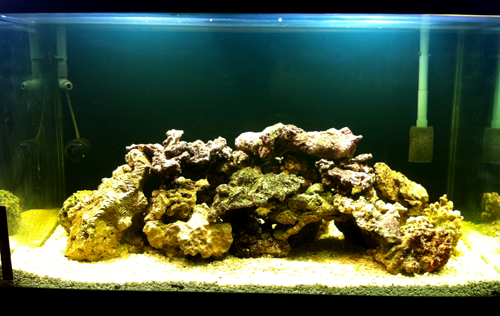 Then I helped him fill it.  One of our first dates happened to be to a fish store!

That is the first set of goodies we took home.  It was super exciting.

The tank was a sixty gallon, glass beauty with old metal halides and a canister filter. For our non-tank friends, that means it was pretty basic and not exactly easy to take care of.  However, saying we were obsessed is an understatement.

It doesn’t look like much to us now, but we used to stare at that tank for hours upon hours.

This is the first video I ever took of the tank, and even though today it looks sad and empty to us….at the time I thought it looked amazing with the five corals and few fish we had.

We learned so much with that tank, but the main lesson….we needed a bigger tank!
We started the 60 gallon in July of 2011 and bought the 210 gallon in December 2011.  Yea, fast movers fo’ sho.
After we got the big tank, the little one didn’t get as much attention.  Mainly because it was a lot more work to take care of, so in the Spring of 2012 we actually bid our first saltwater tank farewell.  She was a good first tank and we will remember her fondly.
So it wasn’t exactly a show tank, but it spawned our crazy addiction so we have to be thankful for that little skunk of a tank.

5 thoughts on “How we got addicted….”