These guys are our pets, our little buddies, our amigos, our fish family. 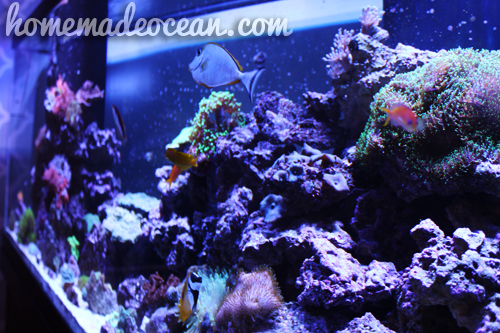 Frankly, I think you should get to know them.  Maybe you can come feed them sometime and then they can stalk your life, because that totally happens.

And while we freely admit to being “coral people” our little water bundles-of-joy have a very special place in our hearts.

So excuse me while I work on creating a Sea-Harmony site to hook these little fellas up. 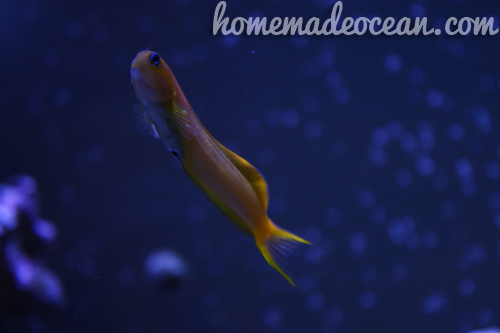 I feel like its fish law that I have to start with my absolute favorite fish.  This is a Midas Blenny and his name is….get this….Midas.  This picture will never do his personality justice.  He swims like an eel and has all kinds of weird hiding places, sort of our own Where’s Waldo.  Maybe that should be his new name.  He likes long walks on the beach and picnics ladies. 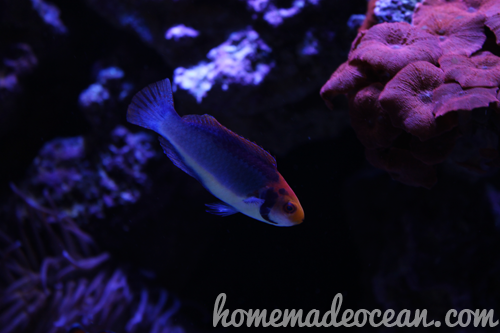 This beaut is named Calypso…sentimental reasons.  Our first date we watched Pirates of the Caribbean and afterwards I downloaded John Denver’s song Calypso because that creepy lady reminded me how much I love that song, naturally.  Then, my boytoy sealed his fate….he sent me first date flowers to thank me for giving him a chance.  Guess what arrangement he sent, yup the Calypso, yup he’s a keeper.  Interesting little nugget, this clown fairy wrasse is not the original Calypso, we had another but sold her because she was too big for our 60 gallon starter tank. 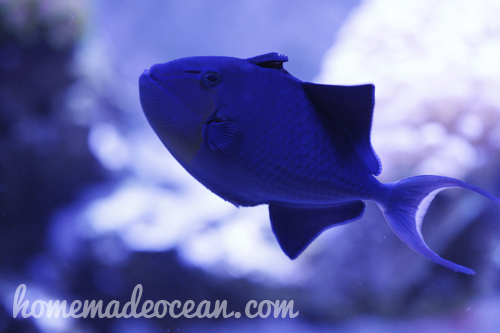 This is Goose…yes he is named after a character in Top Gun.  He is technically a Niger Trigger and he is our only fish that has teeth.  Those teeth come in handy for him when we stick our hands in the tank, especially if there is food involved.  Basically he is a jerk, and if he didn’t look so cool….he’d make a great Craigslist post.  You’ve been warned Goose, kapeesh? 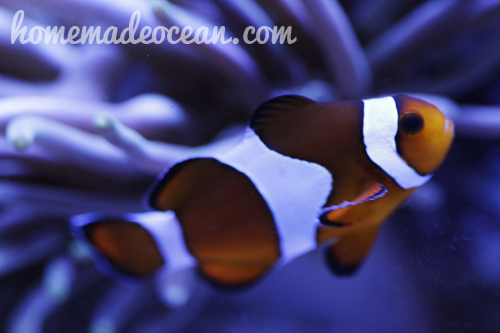 No tank is complete without a “Nemo” aka a clown fish.  We have a pair so these fish don’t need Sea-Harmony.  Getting a good picture of both of them is darn near impossible because they are fast and playful.  Obviously we use these fish to our advantage when kiddos come over by telling them it is indeed Nemo and his pops.  They live in anemones, and we have been accommodating….

These two are plenty busy swimming around all day taking care of 12 anemones, talk about never-ending housework.  Fun fact is that clown fish are the only type of fishie that can swim in anemones…all the other ones will get stung.  It keeps them safe and warm at night from fishies like Goose. 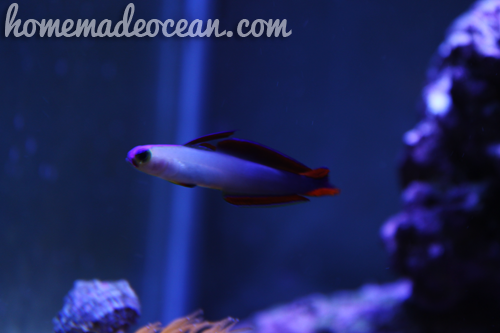 This is our Fire Fish named Miss Holly.  When Tim and I first got into this hobby we were ordering everything online, then I noticed a fish store right up the street.  The owners were so welcoming and basically solidified our salt water addiction by selling us a 210 gallon tank.  They helped us fill it too, so it only seemed fitting that a fish be named after one of them.  Hence, Miss Holly.  She is a scrappy little lady, just doin what she’s gotta do to survive in this fish-eat-fish world.  Looks pretty gangster, right? 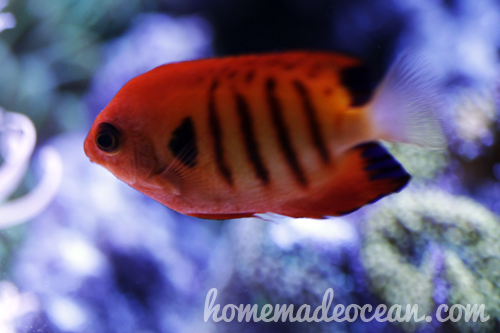 This colorful fish we call Hades.  If you watch Tanked then you’ve seen the Fire Angel a time or two.  She tries to run the tank, be the big boss lady, but she gets distracted by any little smidgen of food.  We love this fish because she is so easy to spot and brings a lot of color and entertainment to our lives.  She is also the fastest fish in town…but I will leave that off of her Sea-Harmony page so that boys don’t get the wrong idea. 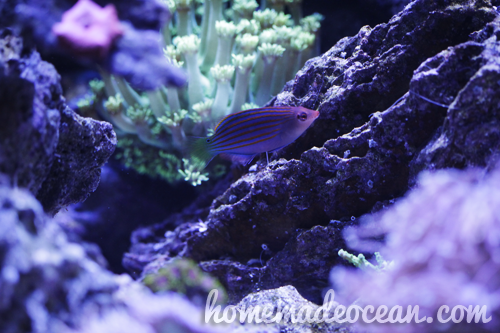 My boy Jesco is a six line wrasse and he is a OG…that means “original” mom.  This guy was in our first fish purchase and called our 60 gallon home until recently.  He does a techno neck dance-swim every time Timbo walks by the tank, I tell Tim that I taught him that.  He can be a terror, picking on much bigger fish, but you kinda gotta cut him slack for his bravery.  He is a tiny guy, but packs more personality than The Situation…and that is scary. 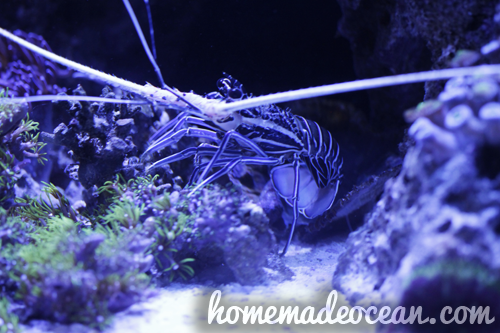 This is our nameless Spiny Blue Lobster.  We can’t name his because we cannot eat pets, and only pets get names.  That is a joke, duh.  The coolest thing about this lobster is how long his antlers are (I only call them that to irritate T).  His ANTLERS span about two feet, that is not a joke.  Most of the time he hides in the back of the tank, but we always know where he is thanks to those uber-long white antennas.  Okay, he is making me hungry….moving on. 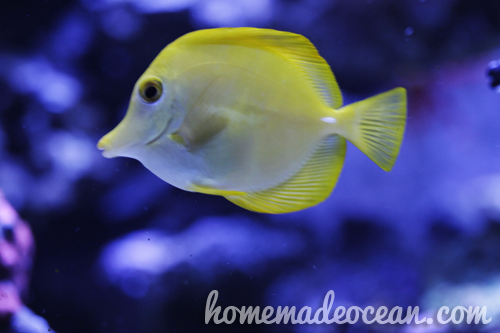 Here we have another OG.  Her name is Schitzy, because when we got her in our very first fish purchase she looked completely panicked.  All the time.  I know I said no tank is complete without a clown fish, but by our laws no tank is complete without a Yellow Tang.  She will always have a big place in our hearts because she is the sweetest fish you will ever meet.  She reminds me of that dorky girl who is so nice to everyone and joins the peace corps to save the children and stuff.  I always wanted to be that girl…which is why I love Schitzy. 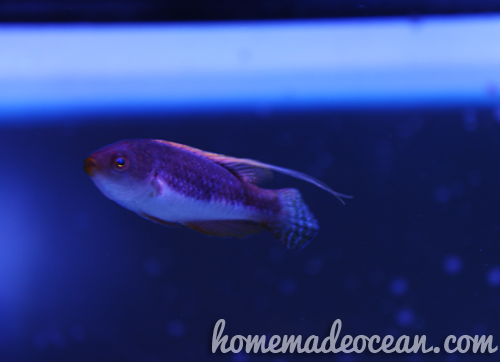 Up above you will find a Sunset Wrasse named Bacon, for obvious reasons.  Around this house bacon is like the bottom portion of the food group table they taught us in grade school…freaking huge.  So it was only appropriate that we honor said food group with a feisty fishie.  This is the weirdest fish we have by leaps and bounds.  I thought it was a boy fish but he gets in these moods and changes colors and acts all crazy, so T says it must be a woman.  Don’t worry ladies, I popped him in the noggin. 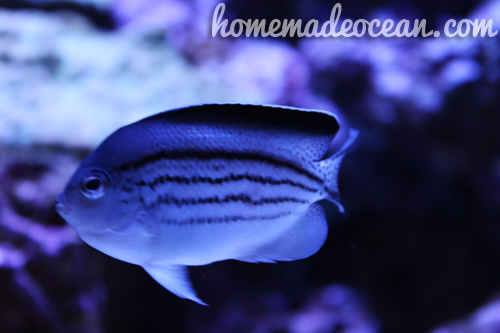 Another creative fish name coming atcha’.  This is Lamarx and he is a Lamarcks Angel fish.  Hey, I changed the spelling to spice it up.  I am not boring, I am not boring, I am not boring.  We added a white and black fish because honestly, with all the crazy colors in the tank we needed something plain.  This little fishie is just that, plain.  Of all of our fish, he has the least personality.  He is our Ben Stein type to keep the whole ecosystem grounded. 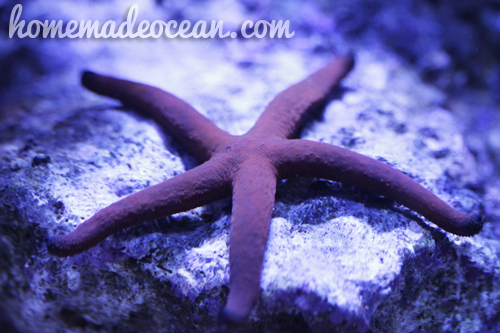 This is Patrick, our starfish.  I am starting to realize that I am not as creative in naming as I once thought.  He is the life of the party.  He has a friend, a sand sifting starfish that will make an appearance just long enough for me to yelp, run to grab the camera, and be disappointed that he buried himself again.  These guys are slow, and boring, but kind of like Christmas ornaments on a tree.  It’s just not complete without a little decoration, and we love em.

Here we have an Orange Anthia…when we bought them there where eight.  We wanted a school of fish in the big tank and these were our best bet for coral safety.  The sad truth in this hobby is that things die…out of the original eight, only two survived.  We named them Jose (Ho-say) and Jose-B (Hos-bee).  Tim was the creative genius on that one.  They stick together like Sonny & Cher, Starsky & Hutch, Cheech & Chong, and well you get the picture….they are hippies I guess.

One of our newest editions is River Fish the Melanurus Wrasse.  Named appropriately because I believe he is something you would find swimming in your shorts on a float trip.  Super colorful and growing like a weed, he made a lot of friends by putting Jesco-the Six Line Wrasse in his place.  If you can’t tell…we have a weakness for a nice wrasse.  Sorry mom! 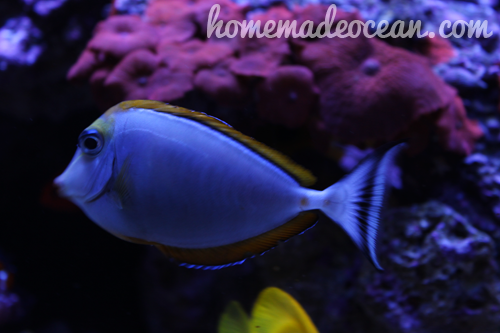 Another of our “must have” fishies was this Blonde Naso Tang that we originally named Barbosa.  We were going for a Pirates of the Caribbean theme on the names since it was a big part of our first date.  But we learned that this is not a crazy pirate fish….she is like the popular-and-gorgeous-but-a-little-on-the-dumb-side girl in high school.  We all had one.  I bet if she could blow big bubblegum bubbles in this tank, she like totally would.  Maybe this image is simply because Blonde is in her name, but she is totally a Barbie. 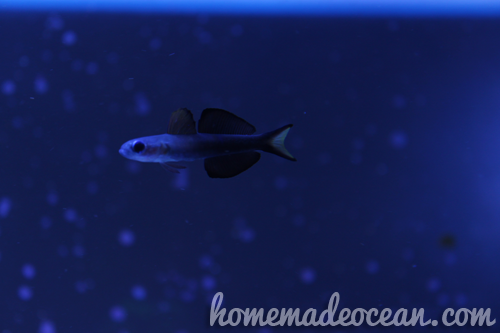 This little, and I mean little guy is Graybar.  He is a Scissortail Dartfish and he is a jumper.  He had a brother, but he was bound and determined to get out of the tank.  He started by taking the long journey to our basement through the sump plumbing, then after graciously being placed back in the tank upstairs….he jumped with all of his might into the glass at the top of the tank.  Then, he dove to the depths of our hardwood floor, and he killed himself….stupid fish.  I think Graybar likes being the solo bar of gray in the tank…so we never replaced his brother.  Thank goodness this one isn’t suicidal. 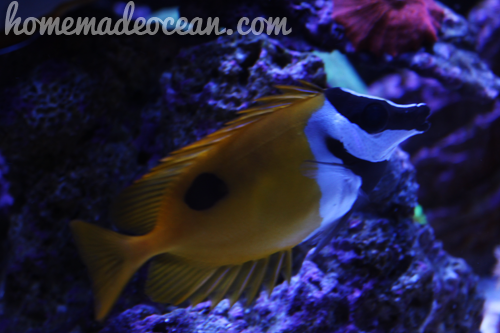 We began with my favorite, so we will end with my boytoy’s.  This is Finley, he is a Foxfaced Rabbitfish and one of the coolest things in our tank.  He raises those spiky fins to protect himself…and apparently there is a lot of danger up in there.  Finley has personality for days and becomes pretty much everyone’s favorite fish when they see our tank.  I think he makes quite a fashion statement. 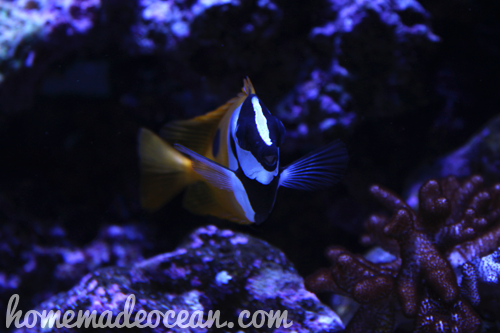 Here he is performing for the masses, I think they should make a movie about him.

Of course this is not all of our fish, just the ones I could catch on camera.  We have a few Damsels and one lunatic Blue Devil Damsel named Boise living in our sump.  There is also a Neon Dottyback  named Dobby that has taken up residence in our overflows like a weirdo.  Another irritatingly common thing with salt water tanks is to have a lot of livestock that hides, like our gross sea cucumber, and goby, and starfish.

We would love to always be adding fish, but sometimes you just run out of room in a homemade ocean.